The Punjab region of India and Pakistan has a historical and cultural link to Indo-Aryan peoples as well as partially to various indigenous communities. As a result of several invasions from Central Asia and the Middle East, many ethnic groups and religions make up the cultural heritage of the Punjab.

In prehistoric times, one of the earliest known cultures of South Asia, the Indus Valley civilisation was located in the region.

The epic battles described in the Mahabharata are described as being fought in what is now the State of Haryana and historic Punjab. The Gandharas, Kambojas, Trigartas, Andhra, Pauravas, Bahlikas (Bactrian settlers of the Punjab), Yaudheyas and others sided with the Kauravas in the great battle fought at Kurukshetra.[27] According to Dr Fauja Singh and Dr L. M. Joshi: "There is no doubt that the Kambojas, Daradas, Kaikayas, Andhra, Pauravas, Yaudheyas, Malavas, Saindhavas and Kurus had jointly contributed to the heroic tradition and composite culture of ancient Punjab".[28]

In 326 BCE, Alexander the Great invaded Pauravas and defeated King Porus. His armies entered the region via the Hindu Kush in northwest Pakistan and his rule extended up to the city of Sagala (present-day Sialkot in northeast Pakistan). In 305 BCE the area was ruled by the Maurya Empire. In a long line of succeeding rulers of the area, Chandragupta Mauryaand Ashoka stand out as the most renowned. The Maurya presence in the area was then consolidated in the Indo-Greek Kingdom in 180 BCE. Menander I Soter "The Saviour" (known as Milinda in Indian sources) is the most renowned leader of the era, he conquered the Punjab and made Sagala the capital of his Empire.[29] Menander carved out a Greek kingdom in the Punjab and ruled the region till his death in 130 BCE.[30] The neighbouring Seleucid Empire rule came to an end around 12 BCE, after several invasions by the Yuezhi and the Scythian people.

In 711–713 CE, the 18-year-old Arab general Muhammad bin Qasim of Taif, a city in what is now Saudi Arabia, came by way of the Arabian Sea with Arab troops to defeat Raja Dahir. Bin Qasim then led his troops to conquer the Sindh and Punjab regions for the Islamic Umayyad Caliphate, making him the first to bring Islam to the region. 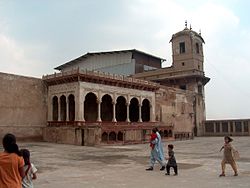 During the establishment and consolidation of the Muslim Turkic Mughal Empire prosperity, growth, and relative peace were established, particularly under the reign of Jahangir. Muslim empires ruled the Punjab for approximately 1,000 years. The period was also notable for the emergence of Guru Nanak (1469–1539), the founder of Sikhism.

In 1758, Punjab came under the rule of Marathas, who captured the region by defeating the Afghan forces of Ahmad Shah Abdali. Abdali's Indian invasion weakened the Maratha influence, but he could not defeat the Sikhs. After the death of Ahmad Shah, the Punjab was freed from the Afghan yoke by Sikhs between 1773 and 1818. At the time of the formation of the Dal Khalsa in 1748 at Amritsar, the Punjab had been divided into 36 areas and 12 separate Sikh principalities, called misl. From this point onward, the beginnings of a Punjabi Sikh Empire emerged. Out of the 36 areas, 22 were united by Maharaja Ranjit Singh. The other 14 accepted British sovereignty. After Ranjit Singh's death, assassinations and internal divisions severely weakened the empire. Six years later the British East India Company was given an excuse to declare war, and in 1849, after two Anglo-Sikh wars, the Punjab was annexed by the British.

In the Indian Rebellion of 1857 the Sikh rulers backed the East India Company, providing troops and support,[31] but in Jhelum 35 British soldiers of HM XXIV regiment were killed by the local resistance, and in Ludhiana a rebellion was crushed with the assistance of the Punjab chiefs of Nabha and Malerkotla.

At the time of partition in 1947, the province was split into East and West Punjab. East Punjab (48%) became part of India, while West Punjab (52%) became part of Pakistan.[32] The Punjab bore the brunt of the civil unrest following the end of the British Raj, with casualties estimated to be in the millions